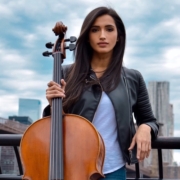 Masters Degree from The Juilliard School; Bachelor of Music degree from the New England Conservatory; Soloist with the World Civic Orchestra, the Symphony of New Hampshire, and the Genesee Symphony

Marza Merophi Wilks, a Peruvian-born cellist, holds a Masters Degree from The Juilliard School where she studied with Natasha Brofsky. She also holds a Bachelor of Music degree and a Graduate Diploma from the New England Conservatory, where she was a student of Natasha Brofsky and Paul Katz. Ms. Wilks has appeared as soloist with the World Civic Orchestra, the Symphony of New Hampshire, the Genesee Symphony, Cayuga Chamber Orchestra, and Orchestra of the Southern Fingerlakes. She has toured with the Sphinx Virtuosi, performing in such venues as Carnegie Hall and the Kennedy Center.

Ms. Wilks has played in many orchestras including the Orpheus Chamber Orchestra, Orchestra of St. Luke’s, Boston Philharmonic Orchestra, and Apollo Orchestra. She is thrilled to be a soloist on the Grammy-Nominated album “Ruggles, Stucky, & Harbison: Orchestral Works” which was performed by the National Orchestral Institute Philharmonic with David Alan Miller as the conductor.

Videos (Marza and/or her students)